The past week was a bit of a blur and part of me is grateful for that. Too much it seems was going on in the world. I am rather glad I missed most of it. Tuesday was my brother’s high school graduation and while not everything had gone entirely to plan in the days leading up to the big event, things had begun to finally work themselves out.

We made our way into the arena where the ceremony would take place. Though it was only midmorning, the weather was already hot and humid, however, thanks to my grandfather’s attendance (and his handicap placard) we didn’t have to walk far. I scanned the program while we waited. There were over six hundred names in total, double that of my graduating class. We might as well get comfortable.

The orchestra began to play as we rose for the national anthem. Most of us stood in silence, preferring to let the trained voices of the chorus do their work. But not my grandfather. At 101, he belted out the lyrics as proudly as if he was a superfan at a rock concert (something by the way he’d never willingly attend – he’s more of a jazz man). Then it was on to Pomp and Circumstance, as the graduates filed into the building dressed in their black robes and graduation caps.

After what felt like ages, I saw my brother enter. We shouted and waved, but we weren’t quite loud enough to capture his attention. I saw him scan the crowds looking for us, but not matter how much I jumped, waved, or made silly faces, he just kept scanning. Sometimes my lack of height really is a disadvantage.

The crowds sat as the principal took the podium. Due to the number of names that needed to be called, she asked that we keep our applause to a minimum so that all students and their families might have an opportunity to hear their names called.

I saw my brother rise and get into line at the stage. I fiddled with my camera’s zoom readying to make the shot. I zoomed too much and couldn’t find him. I looked away from the viewfinder, but without the zoom, the distance was too far to make out which of the uniformly clad individuals was him. I heard my brother’s name called. What? Is he already crossing the stage? I was stunned. My grandfather cheered. At 101, it is amazing what rules no longer apply. His cheers snapped me out of my stunned silence and I shouted a quick whoop as my brother took his diploma and made his way back to his seat. 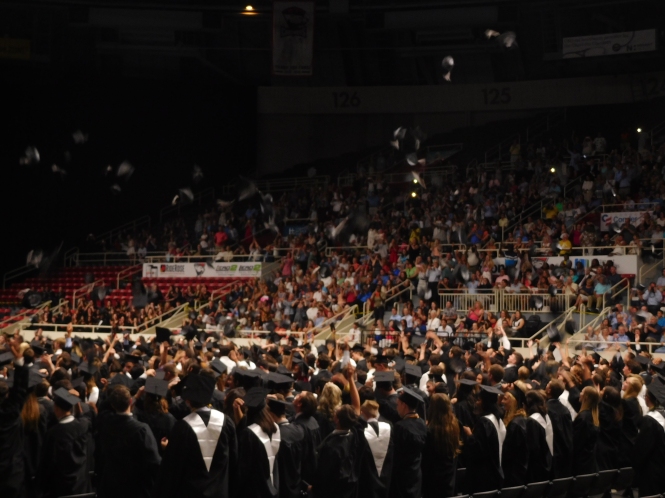 As we exited the arena, an announcement requested that we vacate as quickly as possible in order to allow the next series of graduates to enter the building. They wouldn’t be the last either. Graduation ceremonies will run throughout the next several days filled with speeches about hope, pride, and opportunity, even if flavored with a bit of nostalgia regarding what is being left behind.

I couldn’t help wondering what my grandfather must think of speeches about new beginnings at his age. Did the nostalgia now outweigh the hope and promise? His phone rang as we maneuvered out of the parking lot. His wife, seated by my side, smiled as she listened to the conversation. She leaned over to me. “His brother-in-law is 104 you know.” I, wide-eyed, assured her I didn’t. “Oh yes, and one of your grandfather’s old girlfriends, who is 102, is at the same assisted living center.” She laughed. “Your grandfather has been trying to set them up for the past couple of years, but she doesn’t seem to want to return his calls.”

Clearly, hope, pride and opportunity are not limited to only the graduate, so use them well, and use them often.

28 thoughts on “Hope and graduation”