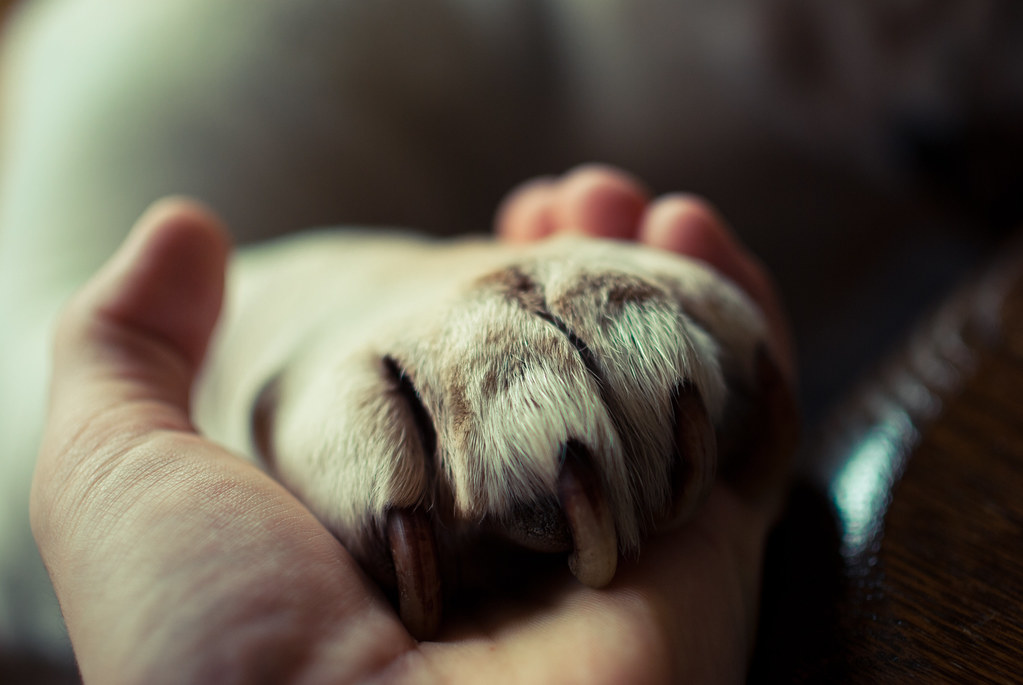 The outside temperature had cooled from volcanic rim to a more comfortable Amazonian jungle as I embarked on a walk around the block with Her Royal Highness, my dog. Within seconds of exiting the house, the soles of my flip-flops were slick from the trapped humidity. Still, it was a beautiful day for a walk and HRH was happy enough to trot along by my side.

As we rounded the corner, I noticed a group of teenagers on bicycles approaching. I raised my hand in greeting. As one of the girls passed, she politely said hello. I was thinking to myself what nice kids when WHAM! The next thing I knew I was experiencing the joy of flight. My arm was nearly pulled out of its socket while my feet simultaneously left the ground.  Unfortunately, my air time was only short-lived as I found myself next lying on my back in the grassy area that separates sidewalk from street looking up at a blue sky.

Whimper… *blink blink* Owie… It turned out that HRH, having noticed me greet the teenagers decided it would be a grand idea to introduce herself to them as well. Without delay. So what if they were now already several yards away? HRH typically has impeccable manners and so now and then I forget that she also has the natural strength to hoist the remains of the Titanic off the sea bed floor and the speed of a cheetah running from a bee sting. She was kind enough to remind me. She’d taken off at full tilt, ignoring the minor detail that we were still technically attached.

As feeling began to return to my arm I realized that the leash somehow remained gripped firmly in my hand. I had remained strong even though the same could not be said about gravity. I felt the grass by my side as attempted to sit up and had to wonder at my luck to land in the soft earth when my head could have, should have come in contact with the concrete of the sidewalk.

One of the girls shouted from up the hill, “Are you okay?” I guess they’d witnessed my amazing aerial acrobatics and pulled over to assess the situation.

“I’m fine,” I replied as HRH returned to my side and began licking my face. “But she may not be,” I joked as I rubbed HRH’s head with my good hand to assure her I was okay while attempting to look stern and scolding. I turned the leash over as I regained my footing. I realized that hadn’t been a polite response. Though there was still a dull ache in my arm, overall I was okay. Why wasn’t my skull now cracked on the ground much like Humpty Dumpty?

If my hand had only held the leash loosely and I’d let go at the initial snap, I might not have lost my footing, but HRH could have successfully reached those polite kids on their bikes and who knows what sort of injuries might have resulted. If I had let go the minute I realized my feet were parallel to my head I may well be writing this from a hospital bed. But I hadn’t, and because we were still attached, the momentous force that is Her Royal Highness on a mission carried my airborne body just far enough away from the sidewalk to land in the grass with only a minor scrape to show for my experience.

Of course, I would have preferred not to fall at all, but HRH was a stray up until February and the occasional mistake is still to be forgiven. Although, even if she’d been with us since a pup and had years rather than weeks of training, I know a mistake could still happen. No path is without the occasional ill-advised temptation or other misfortune. The point is, that when these speed bumps happen, you have to keep your grip on that which matters most. While your world may, for a time, seem upside down, if you hold on long enough, you too might just find yourself landing safety.

29 thoughts on “Get a grip: a painful lesson on when to hold on”