I’ve grown to associate the summer with the superhero thanks to the plethora of movies featuring masks, spandex, and last-second rescues. But not all stories of the summer involve vats of radioactive goo or other experiments gone awry.

This story started out years ago – almost nine to be exact.

I’d been promoted shortly before learning I was also expecting. Not to worry – while the timing might have been less than ideal, it was all going to my master plan. I was going to have it all and there wasn’t anyone out there who could stop me. Whahahahahah.

It turns out I was wrong. There was a person who could stop me. That person was me. 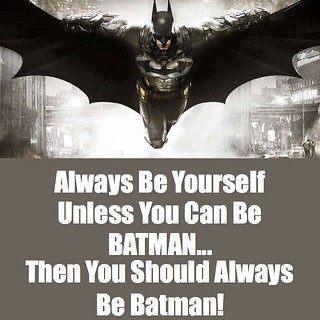 aka – What my youngest wants to be when he grows up. Image courtesy of http://www.flickr.com

Thanks to a series of regrettable mistakes, my eldest son was less than a year old when I found myself in desperate need of a dependable care provider for the third time.

I saw an ad online for a stay at home mom located near my home, and though I liked the idea of a public daycare with their known holidays, trained professionals, and proven curriculum, the lack of balance in my bank account and paid time off, made it all too clear we no longer had the luxury of being picky.

I noticed all her references were from out of state. Desperate times…, I thought as I nervously dialed, but every single one told me the same thing. If she has an opening, hire her. You won’t regret it. Yeah, we’ll see.

The day of our scheduled interview, I brought Kiddo along as if his newborn senses could somehow detect dangers, bad auras, or other half-truths. We started with the story about her most recent move from Maryland and why they, as Iraqi immigrants, had chosen to move further south. Kiddo cooed, rolled, or did something cute and our conversation turned to the matter at hand while she cuddled him and gave him a toy – exactly, how would she care for my son?

The short answer was – like one of her own.

However, in the years since that initial hire, the longer answer also proved to be – much better than how I might have cared for him alone. I’ve since come to suspect that she was less than forthcoming about how she’d come to my town during that initial interview, but then again, if you were interviewing Mary Poppins, would you really trust a person who claimed to have arrived by umbrella? Especially in today’s modern climate? Of course not.

She taught my children responsibility as well as courtesy. When her sister visited from overseas, she gave them the opportunity to experience cultural sensitivity too. Then when my youngest was slow to start walking, she attended his physical therapy sessions with me so that she could ensure his weekly challenges were part of their daily routine. They were lessons I might have taught, but I know myself to say it wouldn’t have been with the same degree of unquestionable patience.

So I will forgive her for the omission regarding her method of transportation. While she might not be a superhuman (unless you are like me, and consider the ability to care for five children under the age of six for eight to nine hours a day without going mad, a superpower) she is still a super human to me.

My youngest son, LT, graduates from her care this week, an event prompting this post. I am overjoyed at the idea I might actually find an extra dollar or two in my savings at the end of each month, relieved at the thought of an extra minute or two at the end of my daily commute and proud of how my son has grown under her loving care. However, I can’t help feeling I’m losing a bit of my support system and a piece of my family, which has added a sadness sprinkled with an ounce of terror too.

I thought – there has to be a word to describe what I am feeling, but maybe it simply hasn’t been translated into English yet. So I looked it up.

and some which made it into the English language, but are not as well known like:

This chapter in our lives may be ending, mine, LT’s, and hers, but I know it is also a beginning for us all too. As LT readies for kindergarten and my needs change from daycare to day camps, I know that there is probably another family out there in need of help, hoping for a last-second rescue.

And to that family – I know the woman floating in via umbrella looks highly suspicious. I do. But if you find she has an availability, hire her. You won’t regret it. Believe me. Superheroes are real. This I know.