LT sat on the tire swing in our backyard, alone. His brother had gone to play with a friend leaving LT to amuse himself while his father and I completed our chores. His legs were curled up as they wouldn’t touch the ground even if extended. As a result, the swing was nearly motionless except for a gentle sway with the breeze. I watched as his mouth move and wondered what the conversation he was having with himself might be about. He looked content, but it was a lonely image.

The last of my cleaning could wait. “Do you want to go to the park?” I called out, thinking there might be other kids he could play with. LT beamed, eagerly accepting my offer and soon we were walking down the street to our local playground. LT chattered about things like clouds, giants and other friendly monsters, smiling at everybody we passed along the way. Never once did I have to tell him to hurry up, or stay with me, or explain why he shouldn’t be carried. Who was this child? 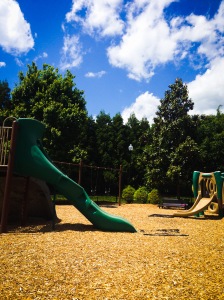 At the park, the sun shone down with only a few clouds breaking up the brilliant expanse of the otherwise blue sky. I settled onto a bench inside the playground as LT climbed up on the play set designed for the bigger kids. “Look at me,” he shouted as he crawled through the plastic tunnel connecting a pair of slides.

I wondered why on earth we were the only ones at the park on such a lovely day. LT went down the larger of the slides. “It’s too hot mommy,” he advised as he reached the bottom. I realized the kid wasn’t exaggerating as I touched the plastic. The equipment might serve as a skillet if it was much hotter. I now understood why the playground was empty.

LT’s brother wouldn’t return for another hour or so. “How about we go on a waterfall hunt,” I suggested. The greenway was not too far away. We just had to go to the end of the sidewalk. LT beat me to the gate.

The temperature dropped a good five to ten degrees (F) as we made our way down the gravel path connecting the trail with the outside world. As always, I felt as if we’d been teleported to some distant place as the canopy of trees stretched out above us. “This way,” LT requested, pointing in the direction of one of his favorite places along the path – a small bridge arching over an even smaller stream.

Leaving the trail, we descended down to the stream below. Large rocks enabled LT to step halfway across where he dipped his fingers into the water at the top of the small falls. “Can a waterfall move?” he asked.

“I suppose it can,” I answered, “but it takes some time to move on its own.”

We ventured further along the stream bed to where the bank was broken up by a myriad of smaller rocks and pebbles. LT reached down and grabbed a handful of dirt. Throwing it into the water, we watched as it dispersed into a ribbon-like cloud as the current took it downstream. LT grabbed a larger rock and this one too went into the water with a plunk, but unlike the dirt, the rock remained in place. You could almost see the gears turning in his head.

“Can you make a waterfall?” he asked.

Once again I nodded and soon he was grabbing rocks, twigs, and bits of dirt. The water bulged where LT had added his obstacles, rising over the additional rocks as it rejoined the existing flow. It was hardly Niagara Falls, but it was enough of a difference in height for LT to declare success.

I knew by this time his brother was likely home and would be looking to share his own adventures with us. “Are you ready to go home and tell Daddy all about your waterfall?” I asked.

“But it’s not my waterfall, mommy,” he answered with a smile. “It’s ours.”

“All I did was stand here,” I countered as my heart did a little flip-flop as it tried not to melt.

“But you were here with me,” he replied.

It was a comment that probably kept him from getting grounded for life when he decided to lock himself in his room later that night in protest rather than get ready for bed. Ah, kids. And like that he was once again the child I recognized.

I’ve thought about the stream and our waterfall. He only moved a few rocks, true, but even so, the stream will never be exactly the same. The newly formed eddy, as small as it is, will cut into the stream bed creating new paths for the current to flow. These underwater paths, these series of small adjustments, might go for years unseen but will continue to trigger more changes. Another rock might shift. Another eddy form. Until one day, years from now, someone might dip his or her finger into the top of a waterfall where one did not previously exist – all thanks to LT and the difference he made at the place where the sidewalk ends.

And it will be our waterfall because you were here with me. We’re never as alone as it seems. I know we can move waterfalls. All it takes is to first be willing to make a small change.