Diana over at Myths of the Mirror challenged writers to interview their muse after finding that hers had recently outsourced the job to a merciless mercenary for hire/part-time healthy life style disciplinarian. But upon accepting the challenge, I found my muse somewhat difficult to track down… 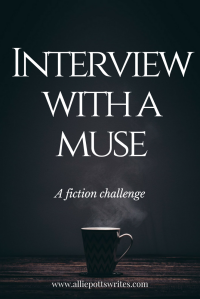 The air was heavy with procrastination as I heard the door open behind me. I didn’t have to turn around to recognize her perfume, a mix of earth and chocolate spice. It could only be Moka. Moka Chino. She spelled her name with a k rather than a ch. She thought it gave her an extra shot of originality. I’d never had the heart to tell her I thought it made me question whether her head was on right.

She sashayed into my office as if it hadn’t been years since we last met. Though I tried to keep my expression neutral, I couldn’t help drinking in her appearance. “What brings you to the old neighborhood?” I asked as she removed a pair nutmeg shaded glasses, revealing mascara stained eyes underneath.

Latte was Moka’s cousin. Tall and skinny, though just as smooth. I’d met her at one of Moka’s parties and we’d spent the next hours in easy conversation. Latte’s side of the family wasn’t nearly as rich and she’d offered to help with the occasional job or two for whatever change I could spare, which was never much.

It was worth the expense. Her contributions might cause me the occasional heartburn, but they never failed to get results. She was reliable that way. It wasn’t like her to disappear without leaving a trace.

A lock of white slipped from her frothy up-do. I fought the urge to inhale her scent, as I helped sweep it back into place. She was bad for my health. Some might argue, toxic. I knew it. It was another reason I’d kept my distance. But I also knew she didn’t need to ask. Moka was someone I could never say no to. The problem was, she knew it too.

Latte spent her time between gigs in the editorial department of a local publishing house. It would be my first stop.

“Thanks for agreeing to meet with me,” I said to Latte’s boss, B.K. Caffé, a huge man with a complexion as dark as his current expression and crushing arms.  I extended my hand.

“I apologize. I was given the wrong directions in reception. Has anyone ever told you guys that this place is difficult to navigate?”

“You said this was about Latte?”

“Yeah, her cousin says she hasn’t seen her in awhile. Looked worried.”

“Yeah, well I haven’t seen her lately either. Now I’ve got senior management roasting my beans. I’ve had to bring my sister’s kid on board just to deal with the slush.” His scowl deepened as he glared as something or someone behind me. “But now I’m beginning to wonder if I was better off.”

A kid who must have traded his diaper in for an overpriced suit stood there. From the slicked back hair to golden pinkie ring, he could pass for an extra in the Wolf of Wall Street. He marched across the room like I wasn’t there. “We need to talk about my assignment.”

“But Uncle B, I really don’t think you are recognizing all the benefits I bring to the table. I should be in charge out there.”

“And yet I still don’t have a publish-ready novel from you, now do I.”

“We can talk later. Now do the job I’m paying you to do.”

The kid left, slamming the office door behind him. “Kid thinks he’s bulletproof,” B.K. said more to himself than to me, shaking his head.

“So Latte.” I took out my notebook, bringing his attention back to the matter at hand. “You saw her last…”

“Weeks ago. We sent a draft off to beta readers and a crew went out celebrating.”

“Not my scene.” He crossed his arms over his chest and leaned back in his chair. “I’ve been told I can be a bit of a buzz kill.” Someone knocked on his door. B.K. looked at his watch. “Are we done? I have a schedule to keep.”

“One last question. You wouldn’t happen to know where they went to celebrate, would you?”

“Where else: Quotable Potables.”

I was familiar with the hot spot. Signs of wear on the bar’s exterior were beginning to show. Even so, it still maintained a stable of regular customers thanks to its welcoming atmosphere. I made my way to the back where a makeshift karaoke stage, stood. It was also where I knew I’d find the Pinot Sisters.

They were seated at a nearby table, ready to launch into song the moment the equipment came online. I pulled out a chair and handed them a picture. “I’m looking for a gal named Nila Latte. You didn’t happen to see her here recently, did you?”

Both girls had the kind of legs that made you want to laugh or weep but were just as known for their bubbly personalities. Usually, the trick was getting them to stop talking, but neither offered a word. “Yes, you did.” I tapped the photo again. “A gal like that, on your turf. Yeah, you noticed.”

“We don’t remember.” Nora, the red head, pushed the photo back at me. “Okay?”

Gio, the blonde, began to sweat, “She was iced!”

Nora covered her sister’s mouth. “We don’t know that.” Her gaze swiveled around the room as she looked for who else might have overheard Gio’s outburst. “Really. We don’t. Most nights are a complete blur. Ask anyone.”

It was clear that the girls were spooked and weren’t going to tell me anything more, but they’d given me an idea as to who to talk to next. I left the bar and took a turn down Memory Lane. I’d get to the bottom of this story.

Those who are interested in seeing more of this story (or future short stories) are welcome to join my mailing list here and selecting short stories under interests.

66 thoughts on “An interview with my muse – a fiction challenge”

A moment of zen for any who need it.