(affiliate links are included in this post for your convenience).

For those not as familiar with The Writer’s Toolbox, it prompts you with a first, middle, and last sentence as well as a series of descriptions, some more random than others, which help your writing pop as well as a protagonist complete with overarching goals and an obstacle to overcome. I absolutely love it. You can read more about the Toolbox’s creator at the bottom of this post.

You can read the first post in the series here. 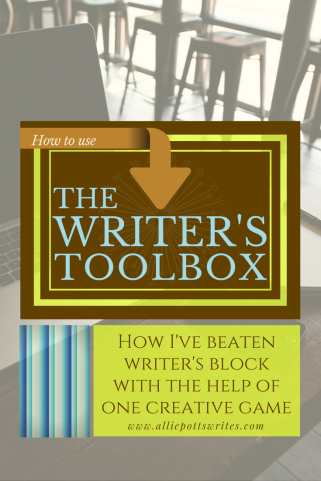 Her mother was doing that thing she did. That thing with the rag in the sink. The neighbors said they’d check in on her from time to time. Even so, Margaret was only too aware how little a promise meant. “Give it to me.”

“No,” her mother clutched the wet cloth next to her chest.

Margaret rummaged around in her purse until she located a purple lollipop. “I’ll trade you for it.”

Her mother approached the offered piece of candy like a nervous animal fearing taming. Margaret didn’t have time for this. Not today. But she couldn’t very well leave. Not like this. The hands on the kitchen clock continued their countdown. All the favors she’d traded. The bargains she’d struck. It was all going to be for nothing. All because her mother liked to play mix and match with her medication.

Margaret schooled her tone and counted to ten. “Sorry. I didn’t mean to snap at you. Go on take the candy. I know you like candy.” Still, her mother hesitated. “It’s purple. Your favorite.” Margaret shook the lolly. Light shined through, brightening its color.

Her mother’s eyes narrowed. Then the rag was in Margaret’s hand. Her mother dropped to the ground and scurried under the table to enjoy the treat as if afraid Margaret might change her mind. Margaret’s hand itched. One phone call to Iris. No, she shook her head. Calling Iris wasn’t an option. Not anymore.

The clock struck the hour. She couldn’t afford to hesitate any longer. “I’m sorry mom. But this is the only way.” The only thing left she could do was secure the door behind her.

On the following Friday, she packed her bags and planned her escape, kissing the autographed photograph on her mantle of Sy for luck.

Her car idled in traffic across from the Jenny Craig Center. Margaret jumped at the sound of a knock on the window. It was Lillian, her one-time best friend. She tightened her grip on the steering wheel. Move it cars. She urged in her mind. Lillian knocked again.

The driver of the car in front of her opened his door and walked away. Margaret suppressed a groan. She flipped on her turn signal. The driver of the car beside her made eye contact and tipped his hat. Thank goodness there are still gentlemen in this world, Margaret thought. She began turning the wheel, ready to squeeze her car into the next lane as soon as there was a large enough opening. The driver’s head shook slowly from side to side.

Margaret’s heart began to pound. She looked into her rearview mirror. The driver in the car behind her repeated the same gesture.

Lillian rapped her knuckles on the window again. “Save your gas,” she said as Margaret unrolled her window. “There was an accident up on North, blocking the entire freeway. No one is going anywhere. Why don’t you come inside? I’ll get you a coffee. I remember how you like it.”

Margaret’s pulse calmed. A standard issue traffic jam. That’s all it was. Nothing more. She giggled to herself. “Sorry, Lillian, I can’t.” Caffeine would only make her nerves worse. “Maybe another time?”

Lillian’s smile deepened into the sort that proclaimed conquest or spawned notes from a jealous husband. “I’m afraid I must insist.”

A uniformed figure walked up to the passenger window and raised his hand revealing a gun. “You aren’t the only one who has made friends in interesting places since leaving Starbucks,” continued Lillian, “and mine want to talk to you about that weekend in Duluth.”

Will Margaret’s mother get the help she needs? Who are Lillian’s new friends and what did happen that weekend in Duluth?

You can jump to the next installment here.

I believe in this product so much I reached out to its creator, the lovely Jamie Cat Callan, author of the upcoming Parisian Charm School: French Secrets for Cultivating Love, Joy, and That Certain je ne sais quoi

(available January 2nd, 2018) to tell her how much I loved her creation and was beyond thrilled when she allowed me to use her prompts for these posts.

In addition to her upcoming novel, she is also the author of the books Bonjour, Happiness! , French Women Don’t Sleep Alone, and Ooh La La!: French Women’s Secrets to Feeling Beautiful Every Day

A lovely day for a hike