(affiliate links are included in this post for your convenience), I have found it always makes me end on a cliff-hanger. As I am curious as to the story’s end (and hope you are too), I have decided to continue the series with a few more posts. While these posts are not sponsored and do not conform to the rules of the game, I hope you enjoy them all the same.

If you’d prefer to start from the beginning, you can read the first post here. 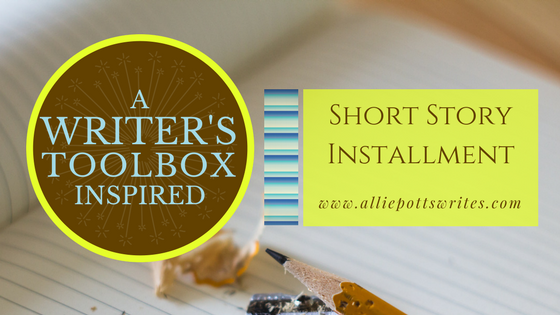 “What exactly are you saying?” Bill asked looking anywhere except into Iris’s eyes.
She reached out and covered his hand with her own. “I think you already know.”
Their waitress chose that moment to approach their table. “Can I get you guys anything else?”

“Not unless the kitchen stocks whiskey as well as handguns,” said Larry.

The waitress frowned as she placed their copy of the bill on the table’s edge and walked away.

“What the hell Larry,” said Iris pulling her hand away from Bill’s. “Are you insane?”

“What? It’s not like she knows I was being serious.” Larry leaned forward as a pimpled teenager wiped down the table behind them.

Bill wrinkled his nose. From where he sat, the rag the kid used smelled like his grandmother’s laundry room. “So what do we do now?”

“Do?” Iris blinked. “Weren’t you listening to anything I was saying? There is nothing we can do.” She frowned at Larry. “Besides if the kitchen did sell guns, what would we do with them? None of us have the first clue how to use them?”

“You don’t need guns.” A woman motioned for Bill to make room on the bench. “Though the whiskey might be nice.” The woman slid next to him, pushing his water glass to the slide to make room for a red leather journal. “I know I should probably mind my own business, but it sounds to me like you could use all the help you can get.”

Larry cocked his head to the side. “Do we know you?”
The woman beamed. “My name is Laurie.” She tapped the bottom of her hair. “But you might know me as Candice Wentworth from The Bus Shelter in the Rain.

The smile left Laurie’s face as her shoulders sagged. She made her voice take on the high-pitched tone of a child’s. “Should’a done it my way.”

His eyes widened. “Bill. Do you realize you are sitting next to Bethany Hallows. As in the Bethany Hallows from Beth Knows Best? I loved that show growing up.” He turned to Iris. “Tell me you watched it.”

Iris looked from Bill to Laurie with twisted lips. “If you heard that much, you know who is involved.” She reached for the scrap of paper that was their bill. “It’s nice to meet a celebrity and all, but I think we should go.”

Laurie’s smile returned. “Oh, I know exactly who is involved. And more importantly, I know where your friend is.” She pulled out a credit card and took the paper from Iris. “Consider this, my treat.”

Jump to the next installment here.