The temperature was a comfortable, albeit cool, 61 degrees F as we reached our destination – a log cabin located in North Carolina’s high country, which my dad and stepmom had rented for the week. The cabin’s interior was a gorgeous open floor plan featuring exposed wood from floor to ceiling. The exterior … well, the home’s exterior was fine, but the view? Not so much.

After driving on a dirt and gravel road around the mountainous hillside, we couldn’t for the life of us figure out why the cabin was built where it was. It wasn’t for the isolation. There were at least two other homes that shared the same drive with porches visible from any of the cabin’s windows. It wasn’t for the vistas. This was Christmas Tree country and rows upon unnaturally orderly rows of Fraser Firs filled much of the landscape, although even that view was blocked by the cabin’s position on the slope. It wasn’t for the late night dining either as we learned that most of the nearby restaurants closed between eight and eight thirty.

Still, it existed for some reason, so we figured we might as well utilize it the best we knew how – as a launching spot for the always memorable family waterfall hunt. The only problem was we also weren’t near some of the more well-known trails scattered throughout the Blue Ridge Mountains, but we were still in an area with a cell phone signal.

I discovered the AllTrails App.

What I liked about this app (aside from the price) was the ability to filter out the trails to those that:

A few taps of the filter pane later several trails were suggested within a short drive away and there was even a map to the trail entry point as well as an elevation map of the trail itself and reviews by other hikers so I had a general idea how the hike might go before we found ourselves in the middle of the woods.

What I didn’t like? When I selected my filters, the list of resulting trails didn’t automatically refresh as one might think it should, but I realized the error as soon as I saw a trail marked as HARD still on the list, so it wasn’t too difficult to fix with a manual refresh.

I narrowed the list of options down to two potential trails – one moderate and one described as more of a wooded walking path than hike. We packed lunches, piled into the car, and soon were on our way.

Our first destination was the Crab Orchard Falls trail which begins behind a church and historic mission school near-ish to the North Carolina and Tennessee border. Thank goodness for the GPS with the app or we might never have found the trail’s entrance.

I’m glad we decided to do this one first as the entire first half of the trail was at a steep incline, which wrapped itself around the mountainside. But then, just as my calves were beginning to complain, we heard it. The unmistakable roar of water crashing.

It is amazing how much easier it is to complete a difficult task once the goal is in sight.

We spent time among the moss-covered rocks at the base of the falls, snapping photos while ensuring that none of the younger set (including Her Royal Highness) decided to go for an impromptu swim while tossing leaves, rocks, and branches in the current if only to see how fast they can travel.

After returning to our car and eating our packed lunch we made our way to our second destination – the Cascades Trail located off the Blue Ridge Parkway. This time the path was easier to find as well as easier to walk, sloping gently away from one of the parkway’s scenic overlooks. A narrow creek babbled to our side. The creek widened. Water cascaded over the rocks creating tiny rapids. We stopped to take more pictures figuring this had to be the area that gave the trail its name.

It was beautiful to be sure, but hardly impressive after seeing Crab Orchard Falls. Still, we kept going knowing that the trail would loop around and eventually put us back out at the parking lot. We crossed a wooden bridge and saw stairs made out of stone. And that’s when we heard it again. The unmistakable roar of crashing water. 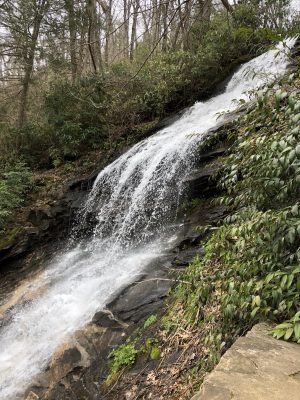 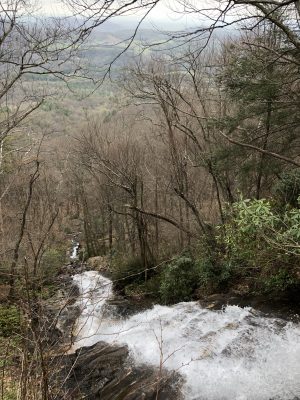 A thin but massive fall with a near vertical drop to the valley below. Gorgeous, wild, and a complete surprise to us all.

It may be easier to achieve a goal when you have it in sight, but it is even more rewarding when you still manage to reach it based on good-faith and follow-through alone.

18 thoughts on “The AllTrails App: How one simple tool helped me discover hidden paths and secret trails in my backyard”