Before I had children, my work sent me to Hong Kong for a period of eight weeks. During this time I was housed in hotel room only a few train stops from the office. I couldn’t speak the language. I couldn’t even read it. My days were my friends and family’s nights back home and vice versa. I was surrounded by millions of people, and yet was alone.

I arrived in early summer, and it rained almost daily over the first several weeks. My hotel only offered three English-speaking television channels. I was barely over my jet lag and already I could tell that this was going to be a long trip.

Then things began to happen. First my younger sister, who was working second shift at the time, discovered that she and I could fit in a virtual game of cribbage before I went to sleep and before she went into the office. We would set up a private table and chat about nothing while pegs moved across the screen. She usually won, but then again she usually wins when we play in real life. That’s always been her game. To me it was like we were living back at home with our parents and every night was game night. The routine combined with regular Skype calls to the hubby helped keep my spirits up.

Then I received an email from my grandfather and responded back. He marveled that his message could reach the other side of the world within minutes of sending. He wanted to know all sorts of mundane details about life in the eastern hemisphere. He would ask questions like, how much is a gallon of gas?

I didn’t drive. I only took the subway or the bus and had no reason to know the answer to his question, but it was my grandpa asking. He didn’t really expect an instantaneous answer. I could have searched the internet for a quick reply, but I had more than a little time to myself and decided to explore and find out the answer first hand. 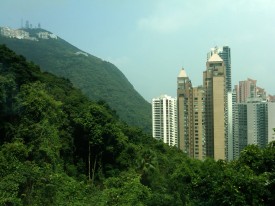 The urban jungle and the jungle jungle

It turns out that gas stations are not exactly easy to find in a land dominated by effective public transit. I was only able to find one through determination and willingness to get a slightly lost. Once located, the sign advertised the price in terms of Hong Kong dollars per liter instead of dollars per gallon. Ah math… The entire exercise reminded me of the word problems we had to solve in school.

I proudly worked out the conversions and hit the reply button. Within a day Grandpa sent me follow-up questions. I felt that I had somehow entered the world’s widest spanning scavenger hunt.

I managed to get my work done throughout my stay, but in addition, I must have crossed the length of the island on foot at least twice. I was able to see temples and markets. I watched as dragon boats raced across the water. I biked along the shore of the new territories. I enjoyed the Hong Kongese take on barbecue at the home of one of my local colleagues. I even managed to win a few games of cribbage.

The internet has made the world smaller.  It allowed me to maintain connections on the other side of the planet, and may have even strengthened those connections. But at the same time, my time over there would have been sorely limited had I remained isolated in my hotel room.

My grandfather taught me a lot in those few weeks about effective goal setting, whether the goal be for personal or professional development.

Goals should be SMART

Specific – All I had to do was send an email with the cost of gas. Measurable – I sent the email or I didn’t. Attainable, but not necessarily easy – Goals should force a stretch or other small change in behavior, but not so large a stretch that a person becomes immediately discouraged. In order to complete my goal I had to leave my hotel.  Relevant – The goal’s completion should be worthwhile. It should be valued by person who created it and by the person doing the work. Learning how to operate a computer was a major accomplishment for my grandfather. If he wanted to know the cost of gas, well then, I was going to find it out for him.  Time-Bound – I couldn’t leave him waiting by his machine for an unanswered email. I had to find out the answer before I departed.

Grandpa, whether you find this on your own or mom reads it to you, thanks again for the adventure.

One thought on “Adventures in goal setting”

Feeling on top of the world. Except for my legs. My legs would much rather be at the beach.