I was out-of-town for the last several days and was catching up on my reading when I came across a post written by one of my favorite bloggers. In her article she asked the question, do you ever involve yourself in a cause that doesn’t personally affect you?

I like to comment on other blogs. It’s my way of saying, no your words didn’t just vanish out into the ether when you hit the publish button, but her question had me stumped. What do I do? I’d like to believe that I don’t have to be personally affected to know something is wrong and to want to do something about it, but when it comes to taking action, do I? Do I regularly?

Ultimately I had to answer the question with an “it depends.” 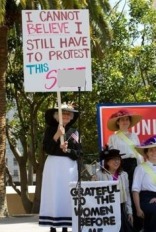 I have to ask myself, does the call to action make sense? Do I truly think my participation will make a difference in the larger scheme of things? It is really easy to be one of the thousands of faceless individuals marching down the street holding a sign with some catchy phrase that may or may not make the evening news. But it usually takes more than participating in a single walk to really enact a permanent change. Someone somewhere has to actually take the lead, become a movement’s face, and act to change the law.

Unfortunately, that means that someone has to get political, and oh how we love to hate politicians.

Two election cycles ago, my dad chose to run for local office.  He was one of several candidates vying for a handful of commissioner seats in a town known mostly for its proximity to a larger city and a body of water. He ran and lost. Then another election cycle came and went. One of the existing commissioners was elected to higher office leaving a vacancy. Suddenly my dad was faced with the very real possibility of being asked (as first runner-up) to fill the seat. Other possibilities were the remaining commissioners would appoint another individual or arrange a special election (Proving election cycles are never truly over).

Our road trip this week took us close to my aunt and uncle. I tried to fit in as many updates about my family as I could over a short lunch. I told them my dad’s latest news to which my uncle replied, “why would anyone want to do that?” I didn’t have a ready answer for him. All I could think of was all the reasons why someone wouldn’t want to get into politics. Putting the sickening amount of money needed to fuel the effective modern campaign aside, why would anyone want their private lives (and the lives of their immediate family) made public, their off-hand remarks taken out of context, and other decisions scrutinized in infinite detail? Why would someone want to voluntarily subject themselves to endless meetings, premature aging, political gamesmanship, and soul-crushing bureaucracy? Netflix’s House of Cards is awesome and terrifying to watch. It may very well be how things are done at the federal level, but I’ve been told that politics closer to home are much closer to NBC’s Parks and Recreation. At the local level, it appears to be a relatively thankless calling.

And yet my dad actually wants this job. He really wants it. He is under the belief that he might actually be able to make a difference. While he does not claim to have all the answers, he wants to contribute toward finding a workable solution. It is at this level where change actually has the strongest likelihood of happening.

My dad and I agree that there are problems that need to be addressed. We do not necessarily agree on how these problems should be solved, at least not completely, and that is okay. He’s never asked for my endorsement (not that it matters – I don’t live in the same town he does and as a result am not as informed about his local issues). 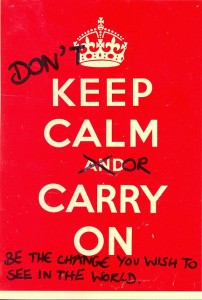 As this gets published my dad may be finding out whether or not his ‘golden’ years are about to get a lot more stressful. I am on the fence regarding the outcome. I hope he gets the chance to make a difference, and at the same time it is a little like knowing your younger sibling has been granted a driver’s license.

Whether or not he gets the nod, I respect that he has done more than just tie his shoes and go for a walk or pin a ribbon to his sleeve in pursuit of change. He’s put himself out there and the system hasn’t crushed him yet (it’s still early). Perhaps if more average people who are tired of the status quo were willing to do the same (or vote in every election – even the ‘unimportant’ ones or volunteer/educate more) maybe just maybe we’d be walking more for exercise and less out of frustration.

What the world needs now may be love, sweet love, but a few new ideas might go a long way too.

6 thoughts on “Be the change”