(affiliate links are included in this post for your convenience). You can read more about Jamie’s other creations at the bottom of this post.

For those not as familiar with The Writer’s Toolbox, it prompts you with a first, middle, and last sentence as well as a series of descriptions, some more random than others, which help your writing pop as well as a protagonist complete with overarching goals and an obstacle to overcome. I absolutely love it.

If you’d prefer to start from the beginning, you can read the first post here. 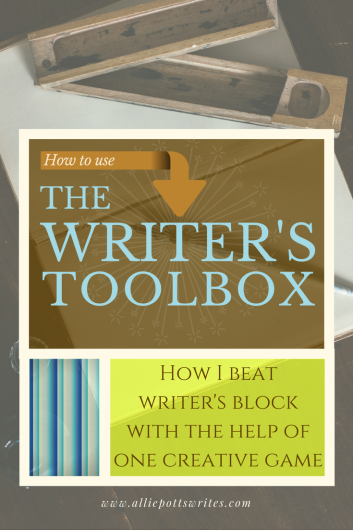 “There she was, Amy Gerstein, over by the pool, kissing my father.” Laurie looked up from the script. “I’m not sure about this line. Do you think my character more upset because her father has a thing for Amy, or because she does?”

The waitress shrugged as she poured Laurie another cup of coffee.

“Hmmm, I think it’ll try it both ways in rehearsal and see which one gets the better reaction.” She slapped the pages down on the table next to a dog-eared copy of an old Danielle Steel novel. “Would it kill the writers to give us an entire script to work with all at once?”

“If you are going to order anything other than coffee, I’ll need to put it in now,” said the waitress. “The kitchen is going to be closing soon.”

Laurie sighed. “I have to lose fifteen pounds by the end of next week. I know. You don’t have to say it. My personal trainer tells me he’s never seen me so fit too, but that’s the biz for you. If you ask me it’s completely unnecessary. There is nothing in the script that says the character has to be skeletal thin and my costume designer is having a fit, but what can you do? I was told in no uncertain terms I either I lose the weight or I lose my job. It’s almost as if they are looking for an excuse to renege my contract.”

Laurie raised the mug to her lips and muttered, “I bet the first thing they’ll do is give the role to that woman from the Stop & Shop too. If she wasn’t Leslie’s current favorite …,” Laurie words trailed off. Losing her job was the least of her concerns if anyone heard her badmouthing someone connected to Leslie in public.

“That’s a no.” The liquid burnt her tongue. If she didn’t need this job to pay her mom’s rent, she’d have walked off the show long ago.

The waitress turned away to serve the table on the other side of the aisle where a pair of men and a woman sat. None of the trio acknowledged the waitress refilling their drinks, too absorbed in a conversation that was growing more animated by the second.

The fresh floor wax caused the waitress to slip on her way back to the kitchen sending her tumbling to the floor. Laurie jumped out of her booth to assist the woman, but the waitress was already upright and heading back into the kitchen before Laurie could reach her.

On her way back to her table she overheard a piece of the trio’s conversation. “He was skating on thin ice – that’s all I can say.”

Laurie slid into her chair and strained her ears while trying to make it look like she wasn’t listening. Whatever the conversation was about, it sounded far more engrossing than re-reading lines from a two-bit script any day.

The sound of the dishwasher in the back shouting something about clean plates and Laurie stifled a curse. The drama going on in the kitchen prevented her from hearing what the woman at the table said next.

“But Daisy would never agree to do that,” said the man seated closest to the aisle. “Not for him. Not for anyone. She would have to know she’d be the first one they’d sell out and risked even more if our father caught up with her first.”

“I’m sure she thought it was the only way to help your mom. Daisy told me her condition was getting worse,” replied the woman.

“And how does getting involved with those people help my mom.”

“Bill, you may want to lower your voice,” said the second man, meeting Laurie’s eyes.

Laurie took another sip of her coffee and shuffled the pages of her script in an effort to look pre-occupied.

Bill ignored his friend’s advice. “If what you say is true, why tell us about it? Aren’t you afraid your own life will be in jeopardy?”

The woman picked at her food. The plate was as full as it had been when the waitress first sat it down. The second man looked at their female companion and then at Bill. “You still don’t get it, man, do you?”

The woman continued to look at Larry. “Let’s just say it has to do with the time Leslie called me a leech.”

Will Laurie find a role worthy of her talents? Will the waitress place a worker’s compensation claim? Who is Leslie and why is everyone so afraid? The series is coming to a conclusion.

I believe in this product so much I reached out to its creator, the lovely Jamie Cat Callan, author of the upcoming Parisian Charm School: French Secrets for Cultivating Love, Joy, and That Certain je ne sais quoi

(available January 2nd, 2018) to tell her how much I loved her creation and was beyond thrilled when she allowed me to use her prompts for these posts.

You can find a sneak peek here

In addition to her upcoming novel, she is also the author of the books Bonjour, Happiness! , French Women Don’t Sleep Alone, and Ooh La La!: French Women’s Secrets to Feeling Beautiful Every Day.