Why do so many people who talk about one day writing a book fail?

Because finding those first words to mark on an otherwise empty page is a thousand times tougher to do when you decide this time you are going to start getting serious. Instead of writing anything, you simply sit there, staring at a white screen or a blank sheet of paper until you either get too frustrated, bored or otherwise called away by the real world. It can be brutal.

It’s not quite as hard as it is to stick with a novel weeks and weeks later when you’ve reached that saggy center typically devoted to world building, supporting character development or introducing the occasional red herrings, and all you want to do is move on to the next big idea, but pretty darn close.

But back to the empty page.

One of the reasons it is so difficult to get started is that many writers, myself included, feel pressure to shine with the very first line. There are a hundred, gazillion articles and pieces of advice out there (that’s likely an underestimate) on what you should do or not do when opening your story.

Don’t start with your character waking from a dream.

Do start with a flashy first hook of a line that will make the reader want to continue.

Failure to follow these rules, or open your story right will cost you, readers. credibility, sales. The love and respect of your family (who you suspect secretly wish you’d abandon this whole writing for a living dream and focus your effort on something more realistic – like getting the kids to school on time or paying bills). So, there’s no pressure to get it right or anything.

It took me a couple of tries, but eventually, I figured out a trick for getting over this fear –

Write the ABCs. Write your grocery list. Write absolute garbage. Just write something. I’ve found that words are like guests at a party. No one wants to be the first on a dance floor, but once one or two are out there and appear not to have a care in the world, the rest will follow.

That being said, I am now faced with an entirely new and unexpected writer problem.

You see, one of the benefits of my nice shiny new home is the fact I now have my own dedicated office where I can do all sorts of writerly things rather than force-fitting a forty to sixty-hour working week into a two-foot by two-foot square, partitioned from a larger room. The drawback is I haven’t had a clue what to do with all this extra space. It’s like the blank page staring at me, and I’m having a difficult time knowing where to get started.

The desk my other half so painstakingly made for me was built into the walls of our last place. Meaning, I am working with a relatively blank slate at the moment as far as furnishing goes. More specifically, I’m working off a card table.

Oh, and the zero key is still missing. Yes, its nothing but the best for me. 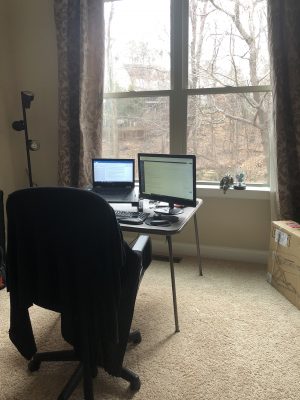 Logically, I know I solving at least one of those problems should be easy. I just have to find a desk I like and hope that the rest of the room’s design will soon follow. However, this is proving to be no simple task. It needs to be wide, but not too wide, as I want to be able to walk around it. With storage for my style guide and other tools, and I want it to be made of wood, but not the manufactured wood that falls apart the second you try to move it.

In short, I want it to be perfect. Hence, here I am, weeks later, paralyzed by indecision, still writing out the word zero and trying not to jostle the surface too much so as not to knock my coffee over. Even so, I’ve somehow managed to write close to 70K words on my latest work in progress (the third and final book of my Project Gene Assist series).

Part of me now worries changing my setup now will upset the creative muse (she is a fickle thing indeed), while another part is pretty sure I would be further along if I’d made a decision sooner. In either case, while I still have a long way left to go before I can say I am finished with this one, it’s, at least, a start. And the start is the hardest part indeed.