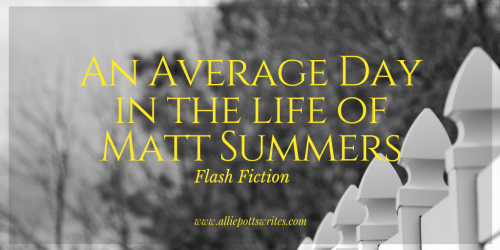 His mother would wake him by opening his curtains, allowing the light to stream in. Only today, his mother snapped them shut shortly after opening them.

“Oh nothing,” said his mother. “I just realized that it’s Saturday and thought you could use a little extra rest this morning. I couldn’t help but notice how much you’re still growing.”

Matt smiled. He had every intention of burrowing back under his covers, but then remembered how close he’d come to beating level twelve on his favorite video game the day before. Unable to go back to sleep, he slid off the bed and padded into the den where he found his mother pulling a decorative sword off the wall. “What’cha doing?” he asked.

“Just pulling this down to give it a cleaning,” said his mother after a slight pause. “I noticed a bit of tarnish.” She tittered, though whatever the joke was, it went over Matt’s head. “Er. Why don’t you go and get yourself a bit of breakfast?”

Matt nodded and went into the kitchen where he poured himself a bowl of cereal. His father entered the room. “Have you seen your mother?” he asked.

“She’s in the den,” Matt said, spilling a bit of milk on the counter. “Acting weird. Taking the sword off the wall so she can polish it.”

“Ah,” said his father, his face taking on a severe expression.

Matt looked at the spot of milk on the counter. “Don’t worry, I’ll clean that up.”

His father blinked. “Right. I’ll go see if I can help your mother.” He turned and exited the room, leaving Matt to finish his breakfast in peace.

After shoveling the cereal into his mouth, Matt went into the den and fired up his video game console. His dad re-appeared, briefly holding a large dusty leather-bound book. Matt guessed his mother must have found another cleaning project for his father to do. “You’re blocking the screen,” said Matt.

His father started. “Sorry,” he said “I must have been distracted. Didn’t see you there.” before exiting the room in the direction of the front door.

The game’s intro music blasted over the speakers. “Alright,” said Matt to himself. “Let’s do this thing.”

Several hours, Matt jumped around the room. He’d done it. Not only had he beaten level twelve, he’d defeated the baddie on level thirteen and fourteen too. He couldn’t wait to tell his friend, Oscar, on Monday all about it. The game’s sound designers had really pulled out all the stops on level thirteen. At times, it had seemed as if the sound of explosions were coming from outside of his house rather than on the small screen in front of him. However, the game designers must have spent their entire budget on level thirteen as fourteen had sounded dull and dead by comparison outside of a single, solitary crash.

His stomach rumbled realizing he’d played his game well past lunch. On his way to the pantry, he noticed the trashcan was full. His mouth twisted and his nose wrinkled, but he grabbed the sack. Taking the garbage out was his responsibility and his mom was obviously in one of her whole house cleaning moods. If he didn’t take the initiative to take it out to the curb on his own, he knew from experience more chores would follow.

Outside, the air smelled of smoke. One of the neighbors must be smoking a pork shoulder. There was something else, though Matt couldn’t quite place it. It was like eggs and milk gone bad. He glanced at the bag of garbage he held in one hand. The stench was probably from that, he just hadn’t noticed it inside.

Rounding the corner, he found his father leaning against the home’s brick wall. “Taking a break?” Matt asked.

“I guess you can say that,” said his dad, picking up the book from where it lay on the ground, still as dusty as it had earlier that day.

“You got something on your shirt,” said Matt pointing at a large oily-looking stain.

His father looked down. “So I do,” he said. “I should probably go and get this cleaned up before it sets.” His father then turned and went inside taking the book with him.

Matt spotted the little old woman who lived at the end of the street standing in the middle of the road. She was staring at their house. He waved. The woman scowled and scurried away. Matt shrugged and returned inside where he found his mother re-attaching the freshly cleaned blade to its place on the wall.

“Sorry, sweetie,” she said noticing him there. “That took longer than I thought it would.”

“That’s okay, mom,” he said, picking up his controller and returning to his game, which he played through dinner. Later that night, Matt lay on his average-sized bed, in his average-sized room feeling he’d accomplished a lot, and yet at the same time, it was as if he had missed something more. He turned over on his side. Giving into dreams, he let the feeling go. After all, it had been just another day on a street where nothing ever happened.

My youngest saw the schedule I’d created for our new normal and offered me a replacement. Negotiations ongoing. #quarantinelife #parenthood