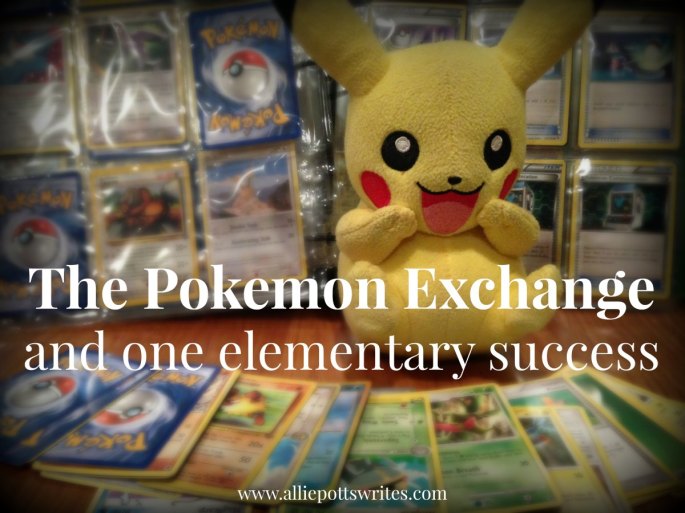 It was a quiet morning. This was most unusual as it was also my turn to escort my kids as well as two of their school aged cousins to the bus stop. Now normally, I would have soothed at least one tear fest, brokered a toy sharing deal that would make a UN negotiator proud, or cleaned up someone’s accident by this point, but none of this had happened. I was immediately suspicious.

I found my eldest, Kiddo and his cousin, Casimir, deep into discussions in the center of our den. Sipping my coffee, I carefully approached, stopping close enough to listen in to the conversation, but far enough away as to not alert them to my attention. The green folder laying next to them coupled with an open white box told me all I needed to know. The source of my peaceful morning was none other than Pokemon.

My brothers, who are a wee bit younger than me, were told under the most severe threats of doom not to discuss Pokemon with my kids. I’d seen the madness that was their individual collections first hand. I’d heard their conversations with my stepmom about rare species and evolved forms. My ears had suffered under the constant refrain of the cartoon’s theme song once before. Not in my house, I’d decried.

But then the unthinkable happened. Pokemon Go became a thing,

Okay, Allie, I told myself, no need to panic. Kiddo doesn’t have a phone or anything (or at least he didn’t at the time). He’s not going to get sucked into playing the app.

And he didn’t. Something even worse happened. Some kid on the bus gave him and his cousin a few trading cards. The kid thought it was no big deal. After all, the cards were his or her duplicates and being apparently a nice well-meaning child, the kid simply wanted to share. Darn you public school system on your new emphasis on empathy, inclusion, and anti-bullying behavior!

Before I knew it, three cards became ten, which somehow continued to multiply to twenty to fifty. Kiddo, as sympathetic as the child on the bus, wanted to share his good fortune with his brother, LT. LT was delighted and their joint collection grew further. Despite my best efforts, I was forced to accept that Pokemon mania had taken root in my house. Reluctantly I raised the white flag.

My stepmom, who is likely overjoyed at the chance to de-clutter her house, was kind enough to divide my brother’s collection into boxes for each of the kids, leaving it up to them to broker individual trades later, which was exactly what Kiddo and Casimir were in the process of doing that morning.

Deal done, Casimir proudly announced to his sister, my niece, Xena that he had secured ten new cards all for a single rare whatsityacallit. Xena looked at the cards in his hands. Her eyes grew wide. “I want ten cards!” she declared rushing into the den where Kiddo still remained.

“Okay,” Kiddo nodded like a retail proprietor, “what will you trade?”

“What are you going to trade for them?” Kiddo repeated.

“Trade?” She batted her eyelashes.

“Yeah. Casimir gave me a whatsityacallit. I will give you ten cards, but you have to give me a rare card. That’s a trade.”

“But I want them soooooo badly,” Xena replied.

I took another large gulp of my coffee as way of fortifying myself against whatever tantrum was sure to follow.

“I can give you one card, but I won’t give you ten unless you trade me for it.” Kiddo offered, diffusing the explosive situation. I supposed I might have interceded at this point, but if Kiddo wanted to be generous with his collection and we avoided a melt-down I was all for it. Bless that child.

Xena scanned his collection. Grinning from ear to ear she proudly held out her newest card for all the world to see as we made our way to the bus stop.

Now when I first observed this entire exchange, I thought the lesson worth sharing here was that no one will simply give you what you want just because you state you want it. You have to do the work. You have to make the trade. But now that I’ve written it all out, I realize that while my niece didn’t secure the ten cards she requested, she still managed to leave with more than she started out with, and at no personal cost. All she had to do was simply state her intended desire at the right place, right time, and most importantly of all to the right person.

My niece may have a future on Wall Street.

So I guess the lesson here is this – while doing the work certainly helps achieve an exponentially greater result, if you openly announce your goal, others are more likely to help you on your path to success (however you define the word).

To that end, (and those who know me understand how hard this next part is for me to do) I am announcing that in addition to writing books, I also offer design services including logo design, covers, and book formatting, because apparently writing books, being a mom, and working full-time leaves me with free time in need of filling (yes, I also think my head needs examination). You can check out samples of my work at Logo and Book Design Services. While I do use stock art, depending on budget, I can also offer a quote with custom photography or illustration and I’d love the opportunity to discuss a project with you.

May your goals for the new year be equally successful.