A few years ago, my mom gave my eldest son a pair of training roller skates. My son is a fan of instant gratification. When he put the skates on and immediately lost his footing, he grew frustrated and lost interest in learning the new skill. The skates were placed on a shelf in our garage.

After some time passed. I would see the skates and ask him if he would be willing to try it again. To give my son credit, he would go along with my suggestion, but then would fall down and rapidly lose interest once again. Finally one day he seemed to get the hang of the process. Sort of. He was able to stay up on his feet, but instead of rolling from point A to point B he would pick up his foot and walk there. It rather defeated the purpose and was a little frustrating to watch.

My husband and I had the brilliant idea that I should strap on my own skates and show him how it is done. The house I had grown up in had been on a cul-de-sac, a round, closed no-through road, which didn’t see a ton of traffic. This gave the neighborhood kids a perfect place to go for any number of outdoor games and activities. At times, it was like our own personal skating rink. I might not have been good enough to compete in something like roller derby, but I was pretty confident on wheels throughout my childhood and teenage years. I ran to pull my skates out of our closet.

As I strapped my feet into my roller blades, it occurred to me that I hadn’t dusted off my skates in several years. My legs wobbled as I stood up. How in the world did I used to do this? The slight incline of my driveway was suddenly extremely intimidating. I heard my husband tell our son, “now look how mommy does it.” Can you say performance anxiety? All I needed was to fall down and crack my head open. We’d never get kiddo to try something new ever again.

I made it down the driveway through a combination of slaloming and walking on the grass. Graceful, I was not. I had wanted to teach my son my skate moves. Instead I taught him that grown-ups need practice sometimes too, even on skills we think we have long since mastered. 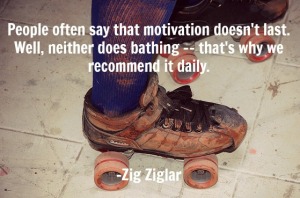 I do not write about topics like positive thinking because I am a Pollyanna, an eternal optimist. I do not see rainbows with every rainstorm. I succumb to pessimism now and then just like everyone else. But I have chosen to post uplifting thoughts because this is how I practice my own internal motivation. Yesterday we were hit with heavy rains during the evening commute. Around here, rain like that somehow seems to always cause the driving public along my commute to forget basic driving rules. Thanks to the traffic, I was running several minutes late when I pulled into my first stop and collected kiddo number one. By the time I arrived at the toddler’s day care I was even later.

We had barely entered the toddler’s room when kiddo announced that he was hungry. Loudly. I must not have acknowledged his pronouncement to his satisfaction, as he repeated this breaking news story. Not to be outdone, his brother added his voice to the mix. Time was officially not on my side.

Somehow I was able to calm the boys. I was likely even more anxious to get home than the boys were. The hunger beast which had replaced kiddo number one was only going to be put off for so long. As we made our way to the car, I couldn’t help but notice that a truck had parked beside my car while we had been inside, and that it was taking up more than its fair share of the roadway.

As I started to back out of my spot, I noticed that there was no clearance between me and the truck. I was trapped in my parking space. The rain was still coming down in buckets. The driver was nowhere to be seen. My boys were still hungry. I suppose I could have taken my chances with the boys. I could have turned the car off, hoping the truck’s driver would soon re-emerge. A person parking that badly surely couldn’t be planning to stay long. I could have stormed back inside demanding that its owner drop whatever he or she was doing to move the truck now, but that would have meant dragging the boys along with me too. Shudder.

Instead I shifted my gears and drove forward. I adjusted my steering wheel, and backed up again. I repeated these steps two or three more times. Finally, I managed to create enough of a gap between our vehicles to continue out of the parking spot without losing my side mirror. Freed we made our way home where the hubby met us with dinner preparations already in progress.

Goals are achieved by taking baby steps. However the path you take to get there is rarely straight and clear. Sometimes those baby steps have to be taken in the opposite direction. While it may feel like a set back, these steps are occasionally necessary to ensure we have enough space to make a course correction. Those small set backs, while frustrating, and time-consuming, might be all that prevents a larger, more serious delay such as a collision with a ill-parked truck.

Sometimes a step back is the only way to leap forward.
http://www.gettyimages.com/detail/143177040

We were released early from work on the Friday before Memorial Day and I peeled out of the lot looking forward to treating myself with a little summer wardrobe shopping before I had to pick up the boys from day care. I snickered thinking of my husband still stuck at his office, toiling away, while I got to indulge in free time. I wanted to call him and say ‘nana nana boo boo’. At a particularly long light, I glanced around for my phone, only to realize it wasn’t in my purse. It wasn’t on the car seat. It wasn’t wedged between the seats.

I must have left it at the office, and leaving it there over a long weekend was not a comfortable option. By the time I returned, nearly a quarter of my free time was gone. I rummaged through my desk draws and moved piles of papers around. No luck. I called my cell phone from my office phone. Silence.

I started to panic. If it wasn’t in my office, could I have left it at the restaurant where I had gone for lunch that day? I hadn’t much cared about my cell phone before back when I had a dumb phone, it was just a tool, but now my smart phone was filled with photos and videos of my boys. I was rapidly turning into Smeagol bemoaning the loss of  his precious.

I high-tailed it over to the restaurant. The lunch staff was long gone and there was nothing resembling my phone in the lost and found drawer. My free time was now half over. I returned to my office a second time to retrace all of my steps between lunch and that afternoon.

No nook or cranny was left unchecked. Still nothing. I called my husband. He had taken me to lunch that day. Did I leave the phone in his car? No.

At this point I had run out of time. Forget about the summer clothes, it was time to pick up the boys. I wished I had never contemplated gloating about getting to leave early. Karma. She isn’t the kind you want to mess with.

Quasi-resigned to filing insurance claims etc, I tried to calm down while I drove home. I then remembered the concerns about lack of privacy surrounding my brand of phone’s automatic communication with GPS . The boys were barely released from their car seats before I was logged into the phone’s website. Sure enough, there was an option to locate my phone. A few clicks later, Poof, there it was. A stationary dot on the map hovering over the restaurant.

In most cases I view Big Brother as the Orwellian villain, but in this case I have to admit he took care of Little Sis.

I called my husband and told him he had to go get it now. He told me he had a flat tire. I called the restaurant and told them they had my phone. They told me to call back later when the evening manager was there. I made it very clear that I would accept no excuses! I was less than my best. I didn’t care. I demanded action – now!

A short time, I saw the dot begin to move. Now I was really panicking. Someone was running away with my property. I thought to myself, I should never have told the restaurant he was coming. A few mouse clicks later I had sent the phone into full lock down mode. Now no one would be able to operate it but me. Cue manic laughter!

The house phone rang. It was my husband. He and the restaurant staff had located my phone. Apparently one of the lunch staff, recognizing its value, had hidden it away from the general lost and found to ensure that it was kept safely hidden from casual view until it was reclaimed. The staff had remained courteous and helpful with my husband even after hearing the sharper side of my tongue.

I was solely responsible for blowing my opportunity for “me time”. However I had redirected my anger and frustration with myself at everyone else. Even though the phone’s loss was not their problem, they had responded as I should have from the start, with professionalism and courtesy.

At least that is how they presented themselves on the surface. Who know what kind of service I might receive on my next visit? Or worse, what kind of additives will be in my food? I may never get to fully enjoy a meal there again, at least not for the next several weeks. I’d be constantly worried that they will somehow remember me as the irrational woman who deserves less than their best.

It never had to be this way. If I had better controlled my anger from the start, returning their professionalism with calm, I might now be able to order some tasty food with confidence without the side of guilt and shame.

I’ll have to tip them more the next time I go there. On second thought perhaps I should tip them first before I eat…, just in case…