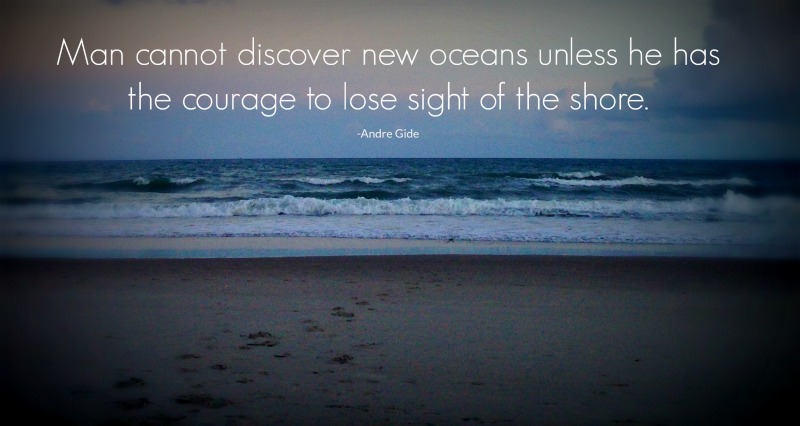 I took an extended weekend on the beach with a handful of friends. We’ve known each other a long time and they pretty much know everything there is to know about me. Including my near irrational fear of getting added to a shark’s sampler pack as I dabble my toes in the water.

“If you get eaten by a shark, I’ll be sure to take everything I’ve ever said back at your funeral,” one would say before diving head first into the breakers. Because equal parts support and ridicule are just what friends are for. I watched enviously from the shore as they floated on their backs, looking oh, so, carefree. I’d forgotten to pack my shark repellent. Shame on me.

A battle launched in my brain. My logic side shouted – Just go. My creative side rolled its imaginary eyes.  Don’t you know what can happen out there? One accidental nibble and it will be open season on us.

The chance of that happening is next to nil and you know it.

Not zero, but still. . . Go on. What’s the worst that could happen?

I get bitten. Duh.

Is that really so bad? Think about it. Most attacks this close to shore are survivable. Sure, you might not be all in one piece, but you’d have a story to tell. You could get on the news or even the talk show circuit. Imagine the improved visibility. That shark bite could be just what you need to launch your writing career into the stratosphere.

Yeah. Um. I think I’ll stick to my existing plan.

Bah. Well, then we have a problem to solve then because it is only getting hotter out here.

“A man who fears suffering is already suffering from what he fears.” – Michel de Montaigne

Pressured by my body’s aversion to excessive heat, my brain got to work. I tried to look at the problem differently. What was it that usually sent me running back to the shore while my friends passed beyond the breakers. My friends aren’t dummies. They are fully aware of what calls the ocean its home. What did they do differently? They don’t look down, I realized. They look at the top of the next wave or just out ahead.

I always looked into the waves, looking for a shadow to appear, and once spotted, my imagination filled in all the terrible things that could be that shadows cause (other than a cloud). My imagination, that thing that works so well for me most other times, was holding me back. So, stop looking down, I told myself.

I focused on the horizon and not at the waves around me, a trick my dad had taught me years ago to combat seasickness and took a step. Then another. The water hit my knees. Then my waist. Then my shoulders. I lifted my above me and dove into that blue-green water and swam.

I only managed to stay out there a few minutes, but it was longer than I had the day before.

But apparently, not everyone’s weekend was as relaxing as mine. While I was away, there had been an incident at the shopping mall near my work. My neighbors, a family of four, were lunching in the food court when they heard a “thunderous sound.” Crowds of people began rushing to the exits in a panic. A man reported seeing a gun. Others reported shots fired, but no casings were found, nor victims of a shooting. However, that doesn’t mean that no one was hurt. At least eight people were transported out of the mall with injuries, likely caused by falls and or the press of terrified people as they tried to make their escape. In this case, fear was the more destructive weapon.

My neighbors were not among the injured, but instead now have to explain to their sons, one of whom is only as old as mine, why any of this could happen. Why things like this (and worse) keep happening.

Fear. That’s what it comes down to.

Fear is what kept me from enjoying my time with friends fully. Fear is what causes me to see danger in each unexpected shadow. Fear drove ordinary people to push their neighbors. Fear is a root cause as well as an end result in a seemingly never ending cycle. Seemingly. It doesn’t have to stay that way.

I am so tired of being made to feel afraid. So while I am aware of my surroundings and recognize the things their shadows may hide, I will try to keep my eyes on the horizon, of what can be, and not look down. And maybe, just maybe, if you join me, we might just get through these breakers, one step at a time.

quotes attributed to http://www.tinybuddha.com. photography is my own.