“There is only one cure for gray hair. It was invented by a Frenchman. It is called the guillotine.” – P. G. Wodehouse

While the cure for gray hairs might only be death, spending a weekend at the beach accompanied by a handful of close friends, a box of wine, and neither kids nor spouses in sight, sure goes a long way toward treating its spread.

We’d arrived after work Thursday afternoon. The sky was blue and the air was still warm from the midday sun though occasionally gusts kept it from becoming unpleasant. Half of the group had arrived earlier and were already well into relaxation mode as I let the sand fill the space between my toes. I looked out to the sea. We meet again, my nemesis.

The sea waved back.

A surf shop at the beach swears by Sharkbanz, which I also refer as my bat-shark repellent. I can’t say it works, but I can say it hasn’t not worked when I’ve worn mine. Image will take you to affiliate link

To be clear, it is not the ocean I have a problem with, but its denizens. Even so, I looked out to the horizon determined. This was the year. I would go swimming with my friends rather than sit on the shore watching their antics with envy, helpless against my galeophobia (that’s fear of sharks) which seemed to have only grown stronger with every year, exponentially more so since my children were born.

I wasn’t always like this. I am sure once upon a time I was able to view a shark and see it the same way my children do – as merely a large meat eating fish rather than the soulless killing machines they are – a predator so perfect it stopped evolving back with the dinosaurs still roamed. I can blame part of it on my teachers in primary school. You see, and some of you may be shocked to read this, I wasn’t exactly the best-behaved child in the classroom. As a result, I was given the opportunity to earn a bit of extra credit by writing a few research papers. Unfortunately, while the teacher’s changed, the topic didn’t – sharks.

I’m sure as far as my teachers were concerned the topic was harmless enough. They probably even thought I would enjoy it. After all, sharks are fascinating as the popularity of the Discovery Channel’s Shark Week proves. However, my teachers didn’t anticipate the scope of my imagination. When I read that some sharks, such as the Bull Shark (a highly aggressive species) can swim quite happily in either salt, brackish, or freshwater, my young mind immediately came to the conclusion that they could be lurking in all lakes, regardless as to size or how far a particular body of water happened to be from the ocean.

“Big sisters are the crab grass in the lawn of life” – Charles M. Schulz 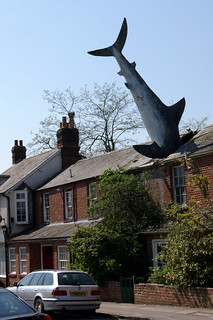 Okay – so technically this is not the aftermath of a real Sharknado, but the Headington Shark in Oxford does illustrate my point nicely. Image courtesy of http://www.flickr.com

You laugh, but it could happen. There are several species of animals with transparent skin and much that we haven’t discovered yet leaving underwater. Also, Sharknado isn’t as fictitious as it sounds. Sharks have, in fact, been known to fall from the sky.

You might be wondering then why a person with a phobia like mine would enjoy going to the beach as often as I do. All I can say is this – it is the beach.

The sand, the sound, and breath-taking sunsets call to me like a siren. While it very well could lead to my death, I’ve found no other place where the command to sit and enjoy the moment is so strong. I love the mountains too, but while I may be cut off from civilization, I am still compelled to be constantly on the move – to hike, to explore, or to otherwise look for the next spectacular view.

But the ocean is different. Though you might sit for hours in the same spot, the view is never the same. Sands shift and tides change.

The ocean is a good reminder that everything changes with time. People too.

After spending most of my annual weekend ridiculed (gotta love good friends) and afraid last year, I decided enough was enough. While the fear might never go away completely, I would not let it rule me. Watching my friends in the water, I’d remembered a trick for handling my fear. It worked too. As long as I kept my eyes on the horizon and never looked into the shadows, I could wade out as deep as my shoulders. I could even swim a few strokes. Unfortunately, I hadn’t recalled this until it was nearly time to pack up and go home.

But that was last year. This year would be different. I just knew it. I went to bed that night convinced I would stun them all in the morning.

“Everybody’s got plans… until they get hit.” – Mike Tyson

The next day rain pelted down courtesy of a tropical depression that had made landfall in Florida earlier that week. It would appear my plans for phobic domination would have to wait.

Proving if you are looking for one nearly foolproof way to achieve absolutely nothing all you have to do is count on the weather.

and may the odds be ever in your favor…

27 thoughts on “One Nearly Foolproof Way to Achieve Absolutely Nothing”

My youngest saw the schedule I’d created for our new normal and offered me a replacement. Negotiations ongoing. #quarantinelife #parenthood